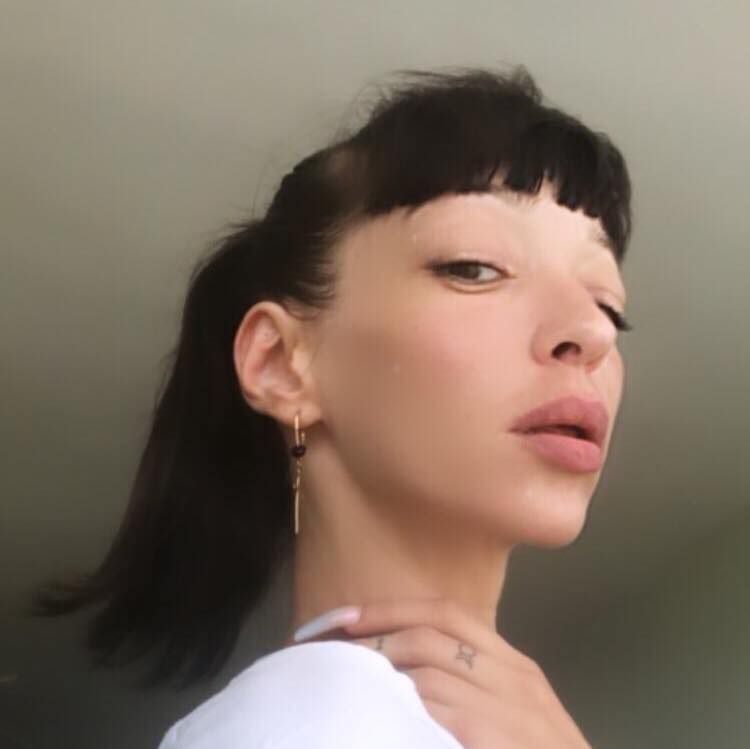 What is ignorant style tattoo?

The origins of the ignorant style go back to 90's in France, Paris Fuzi Uvtrk, a famous graffiti artist and the father of the naive style used to have a wild anti-capitalism group, named UV for ultra-violent. ignorant tattoos got exposure lately at Tattoo Redo -Netflix- Bad tattoos walk.

they got sick of pop culture and graffiti normalization controlled by country rules and used to vandalize large parts of the city-destroying property and trains with rough sprayed graffiti, breaking windows and cutting site with knives.

in 2002 Fuzi became a tattoo artist and gained worldwide fame by tattooing celebs like Scarlett fucking Johansson. he basically ignorant tattoo style  -ignored tattoo classic rules rebelling the standards, starting a new trend of humoristic, cartoon figures, graffiti works artistic sketches and iconic modern poetry on skin. the idea was more important than the technique. the lines became shaky, DIY looking, prison-like, and most of the colouration and shading disappeared.

He literally allowed to a later generation to express art in any format on a human body in the same way as on canvas or bricks. these designs tend to be both cool and hilarious. after a decade the trend was most common in the underground scene it came to popularity in mainstream these days. most of the stream comes from Ukraine, but also France (french tattoo style) and Germany fully stuffed with young outrageous artists.

We tried to collect for you 10 of our best picks of new radical artists all over the world. those who fall way apart of them standards and making huge progress in promoting the expressive new art form. 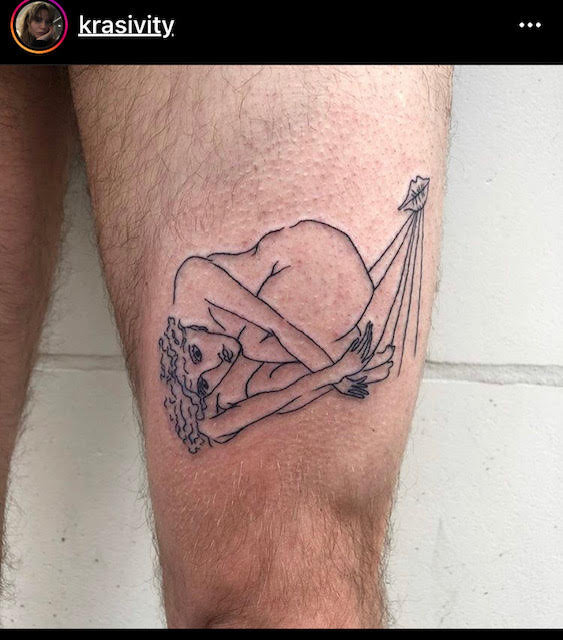 10. Marisha Svidorovsa, @krasivity
23 originally from Kiev, Ukraine now based in Brussels Belgium and traveling. besides tattooing she also a great painter. started to tattoo at 2017 and her artistic flow is well recognized. her tats are beautiful fine lines mostly expressing nature and portraits done in her own fresh style. she gained her fame by clean and elegant work. check out her Instagram page for great ignorant tattoo ideas.  @wearecoal.com/@krasivity

26, tlv Gaya started to tattoo at 2016 working both machine and hand poke. she works at her privet space at tlv in Israel and definitely got her own special hand signature specializing in free form contemporary art and ironic styles. 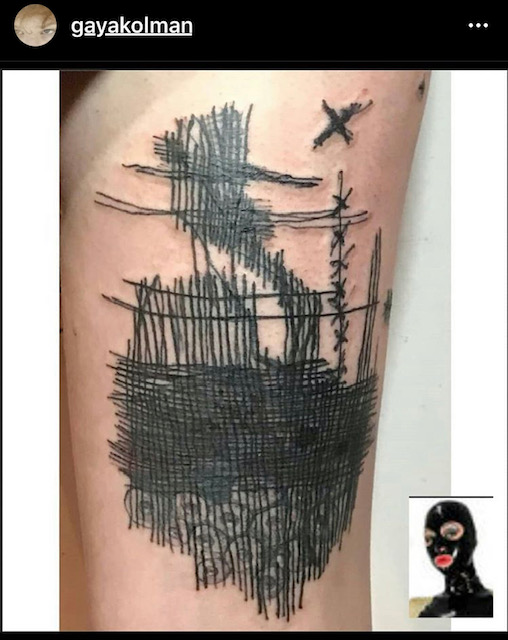 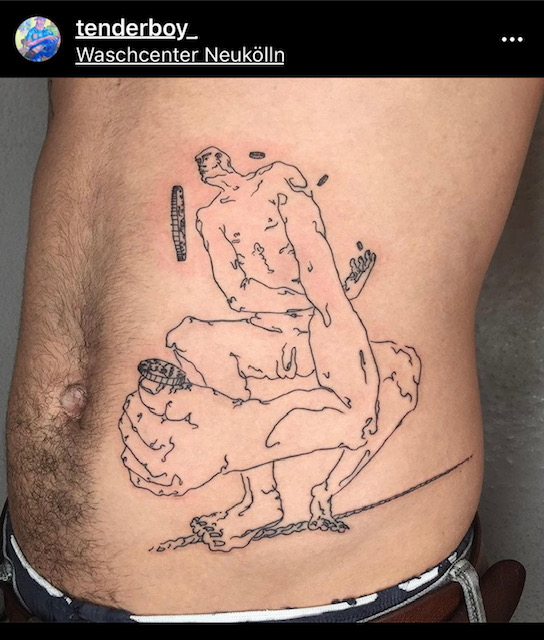 based in Lausanne in Switzerland started his work at 2015. he has privet space and traveling a lot. tenderboy specializing in hand poke spectacular big pieces in short time. he works both privet sketch and free hand, covering huge parts in beautiful original art only. he is wildly known for his amazing work. @jannowhatsup@gmail.com

20, Kiev-based in his hometown Kiev, working at studio @euthanasia_sport a lot of leading stars of the scene came of this major studio. Seryozha art work truly unique and very special. all original simple yet sophisticated drawings. you really need to have a closer look into kind of grimy world of this uprising star. 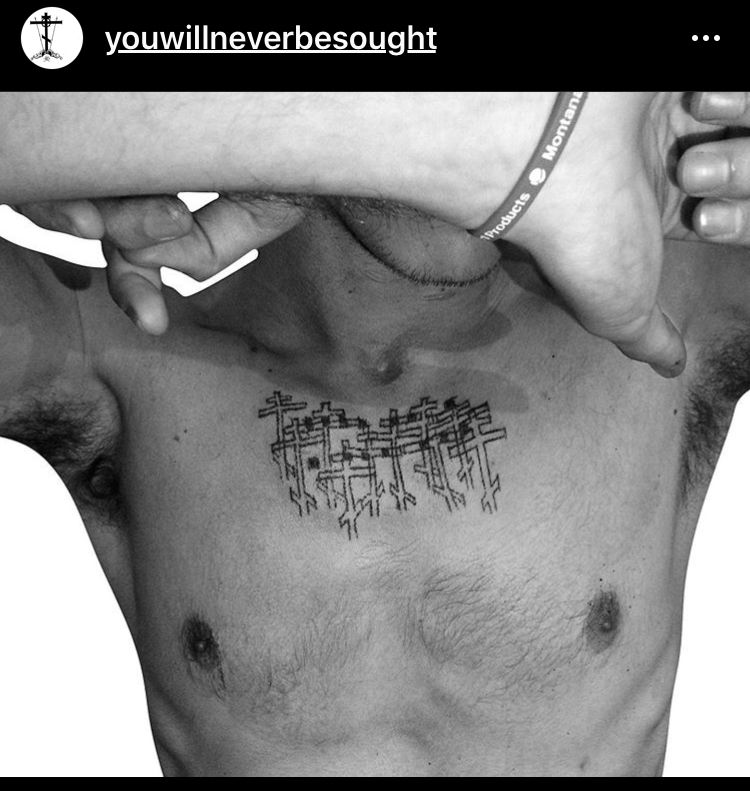 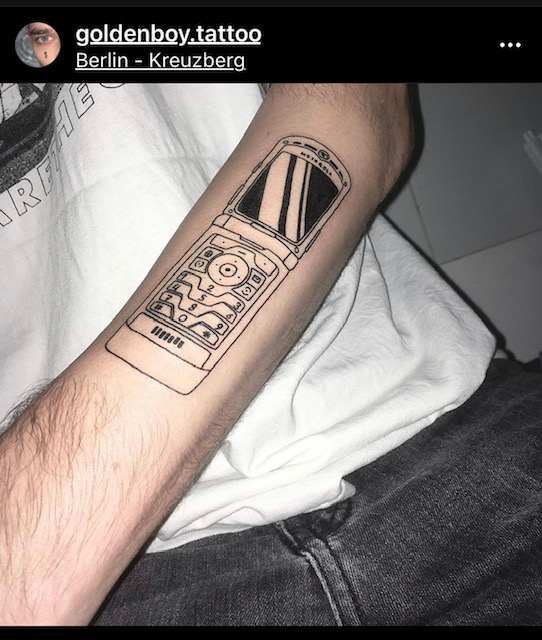 6 Kiril Nekrasov, @goldenboy.tattoo, 23, originally from Donetsk, Ukraine based in Berlin and you really should DM him. he made his first steps as a tattoo artist already at 2014 but started his carrier actually at 2016. Kiki says that the naive tattoo - berlin style tattoo might belong to legendary FUZI, but, as the changing idea it became nowadays, its involving simplifying of the a classic technique, maybe, but as a concept, art work, placement on body- it could be most of the time more complicated than traditional styles and definitely more progressive than normal pop art. Goldenboy style is impeccable, flawless and have a fresh attitude.
check out his page for ignorant style tattoo flash.

5 Chris Woodhead, @adverse.camber, 33, London Chris goes by nickname Woodhead and tattooing for two years. he based in east London at the well known and fine @mariaparadisetattoo studio. he also a musician and singer-songwriter and a band member. his hand signature is quirk, free style and dotty. the tattoos are eclectic and well done. 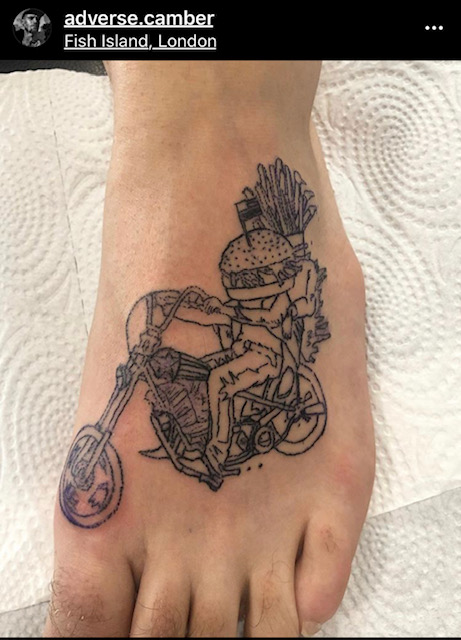 definitely the most dedicated and prime ignorant style tattoos crusader. he well known yet enigmatic and gained his world newness by very brutal, sexist somehow and dark punk humour cynicism at his works. he refused to identify himself besides his artist alter ego, but we can tell you that we talking about a really charismatic creative mind behind the art. this guy known by many faces, as a performer, musician and creative artist. his tattoos both hand poked and machine-made stands out in shaky lines and strong ideas. some of them freehand on skin made. click to see more exclusive auto christ tattoo based items 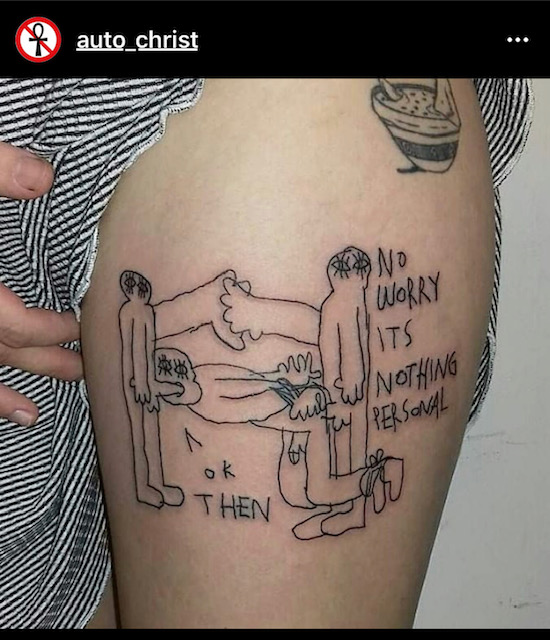 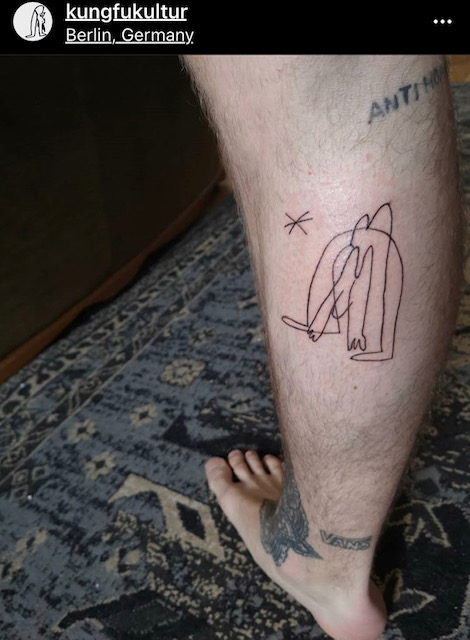 28 Berlin based in Berlin and works home. Charlie's are all original artistic sketches, machine outlines, mostly reminding expressionistic style,berlin style tattoo combined with nowadays naive style. some of his work follow by trends but mainly focusing on authentic art. you could DM him for a cool nice tat for your body art collection.

29 originally from Kiev Berlin based well known tattoo artist who works at the fanciest studio @future_berlin Dima started to ink at 2013 and was one of the main trend pioneers at late generation. his work is outstanding with bold lines, strong hand and style on fleek. you could donate peace of your body for that fine art tattoo work at one of his guest spots at Moscow 1-10 November either at home ground Berlin 20-30 November - sketch style tattoo . 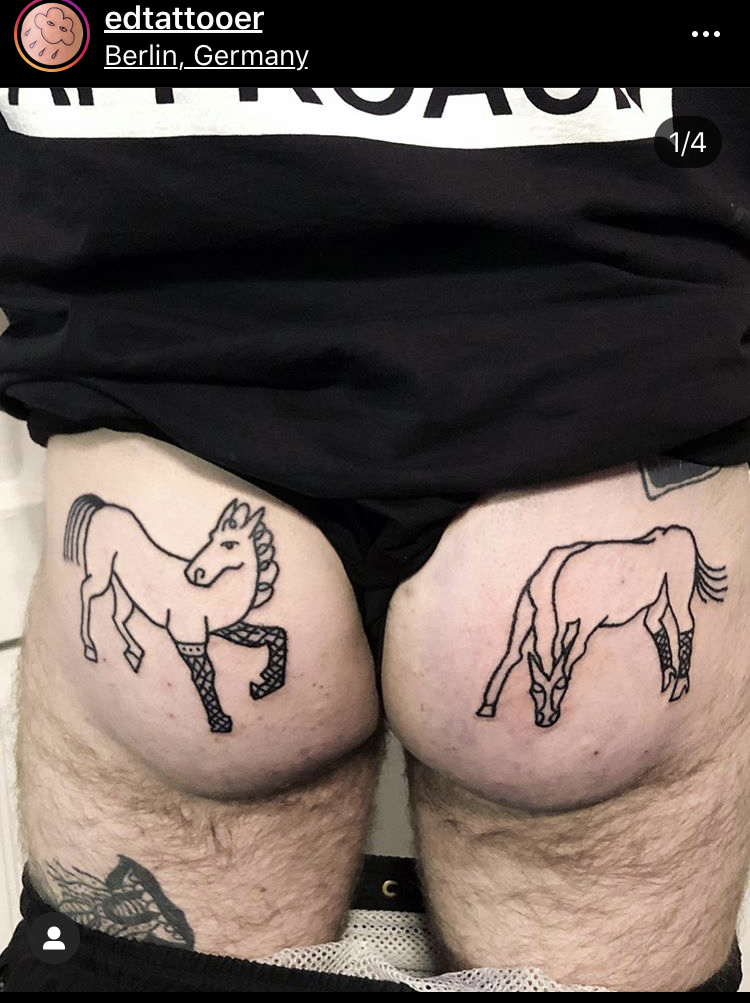 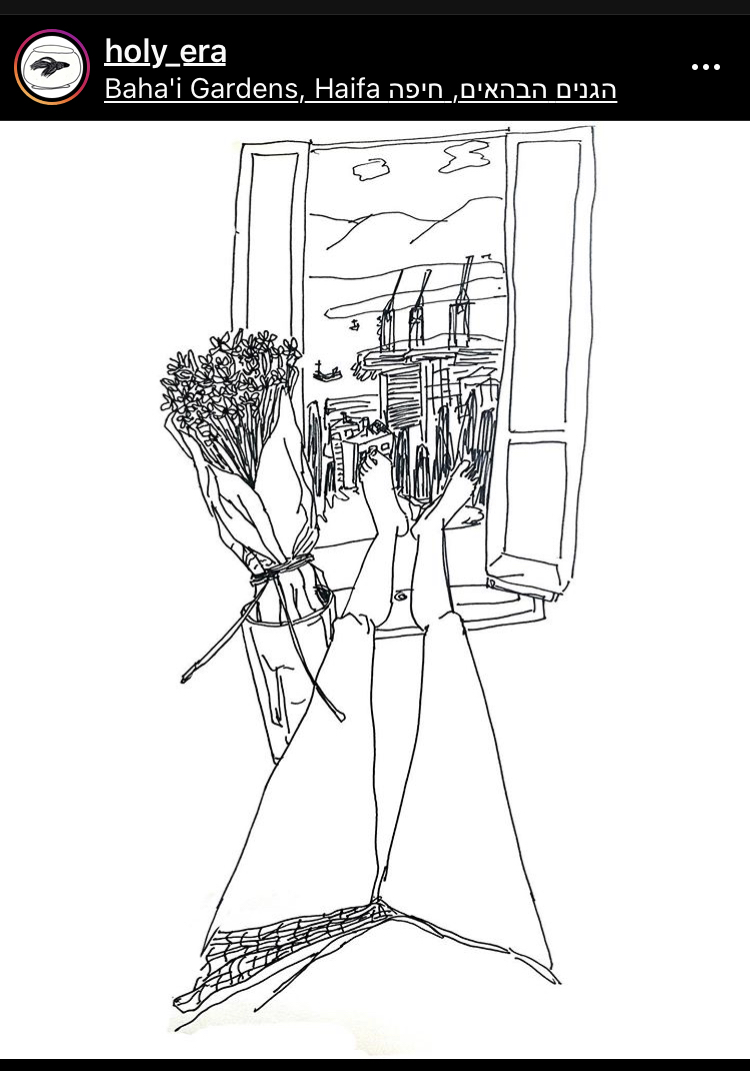 Haifa based graffiti artist and painter, started to ink 9 month ago. she's known for a machine thin outlines. must be the youngest brightest newcomer of the trend. her fleshes are original drawings hand made in minimalistic clean but garage style. she taking tours worldwide and guest spots both in Haifa and tlv. Haifa studio is @trustttattoo and tlv one is @rom_studio, which belongs to Arbelles sister who also happen to be her teacher ''working as sisters together but in different styles is amazing and fulfilling'' - says Arbelle .

Love your mom is an ‘artists for artists’ platform and a tattoo clothing shop.
Tattoo clothing style art studio based in Tel Aviv & Berlin working with cutting-edge artists from all over the world. Incomes are shared with the artists who collaborate with us - be sure that you're supporting your favourite artist by buying his items in our shop. tattoo artist clothing styles.